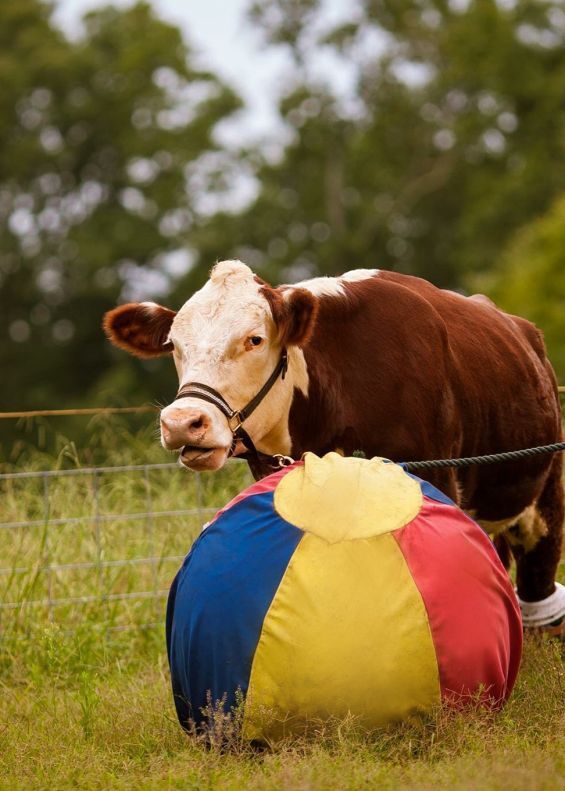 Dudley was taken away from his mom at a very young age and was being raised for slaughter. He accidentally got baling twine wrapped around is ankle and after several days of receiving no help, the blood flow to his foot was constricted and his foot fell off. He spent months hobbling around a pasture in pain, and over time his muscles atrophied, he lost weight, and he was suffering. A friend of the rancher reached out to us to see if we could help. After researching our options, we found a bovine surgeon in Tennessee willing to help him and a company who made prosthetics to create a foot for Dudley. With all the pieces in place we flew to Tennessee to save Dudley from slaughter. Dudley spent 5 months at The university Tennessee Knoxville Large Animal Hospital going through multiple surgeries and amputations to prepare his limb for a prosthesis. Ronnie Graves from VIP Veterinary Inclusive Prosthetics and Orthotics made a special prosthesis for Dudley and after months of water therapy, acupuncture, and muscle stimulation, Dudley was finally used to wearing his prosthesis all day and was ready to come home. We have always wanted to create Gentle Barns in every state, so we created one for Dudley in Knoxville, Tennessee. Dudley came home in June 2015 and mesmerized the world with his joyfulness and playfulness.

During his life time Dudley played ball for hours every day. He played chase and keep away with our fall decorations. He fell in love with our other cow, Destiny and had a wedding. He had birthday parties with hundreds of attendance. He helped adult amputees have hope. He modeled perseverance and resilience to foster children of all ages. He gave and received hugs from thousands of guests from around the world. He inspired thousands of people to go vegan. He was loved by thousands of school children who's teachers made him the focal point of their daily lesson plans. He showed the world how intelligent and affectionate cows are when given a chance. He inspired, and taught, and changed us all forever!

Dudley was only with us for 2 years. He developed an ulcer which ruptured and was irreparable. We definitely wanted and needed more time with Dudley. He affected millions of people from around the world who hadn't even met him, and left those of us who had met him in deep, deep mourning. His joy lit up the world. His hugs healed everything. His sense of humor opened up peoples hearts. He changed the world forever and we will never be the same since he was here with us all!