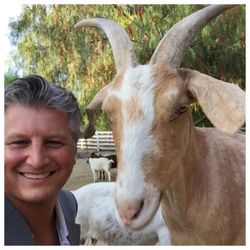 Alec is a founding partner of Olympic Wealth Advisors, a private wealth advisory practice of Ameriprise Financial Services, LLC. He has twenty seven years as a business professional including twenty two years of experience as a Financial Advisor with Ameriprise Financial. His interest is on maintaining a sustainable practice that focuses on helping clients create and then helping protect wealth through socially responsible investing. His holistic approach to the financial planning process works to help his clients achieve their goals and dreams while keeping both eyes firmly fixed on the environment.

Alec brought over fifteen years of board experience to The Gentle Barn and has served as Vice-President twice, as well as President for other non-profit boards. He gratefully celebrates ten years as an active member of The Gentle Barn Board of Directors in July of 2023 and has been Board Chairman during the national expansion to Knoxville, Tennessee, St. Louis, Missouri, relocation of the Knoxville location to a much larger Nashville property, as well as the most recent New York location.

Alec is also heavily active in the field of animal conservation. Through his love of animals and the arts, Alec supports many charities and film endeavors related to environmental causes. After his experience working with the Oceanic Preservation Society team behind the Academy Award-winning documentary The Cove, Alec has increased his efforts to produce films and campaigns that raise global awareness about important and often overlooked social issues. His film producing credits include the multi-award winning documentary How I Became An Elephant produced with former CSI actor Jorja Fox, as well as the history-making documentary film Unity, featuring 100 celebrity narrators including fifteen Academy Award winners. Unity is the epic second installment in the Earthlings Trilogy. In addition to recently handling producer duties on the episodic series Planet Vegan, Alec is currently producing the Earthlings Anthology Series with Shaun Monson and the documentary film Finding Happy.

“It is such a natural step for me to be on the Board of The Gentle Barn Foundation, as I have dedicated my personal life to the conservation of animals. I love the way that The Gentle Barn connects our youth and guides them in the right direction, to be more kind and compassionate people in our society. Helping animals and children… What’s not to like.”

He is grateful for the support of Gentle Barn friends who are helping the foundation continue to rescue more animals as well as expand to a breathtaking new location in New York State with an emphasis on helping retire carriage horses and allowing them a safe “forever home” on the property.