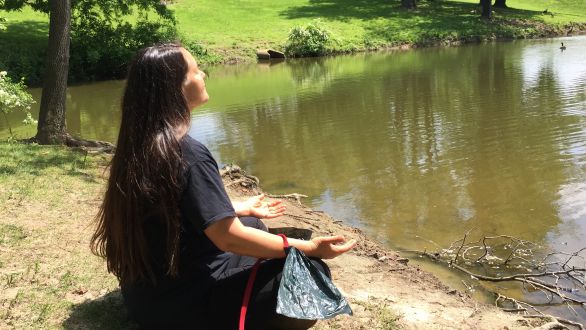 I met a woman the other day. We were talking about animals, politics, and the state of the world from our perspective, and she said to me, “Well, it’s going to be alright because goodness has already won.” I stared at her for awhile trying to compute those words. Has she seen the suffering and the violence out there, I thought, how could she say that? Then, I thought of the progress we have made and the awareness that seems to be spreading. A smile spread across my face that I have not been able to erase since. I cannot get those words out of my head! They keep rattling around and around up there, interrupting conversations, waking me from sleep, and dominating my thoughts. Each time I say them out loud, a peace and joy come over me and I instantly feel wonderful. Now I’m not delusional, I know it’s still a mess out there. However, so many things are heading in the right direction.

Vegan food has pretty much gone mainstream. There are more and more vegan restaurants and products. Eating a plant-based meal is easy, even in the Midwest, where not too long ago it was impossible. I even heard the word “vegan” on a national commercial! The television was on in the background and I wasn’t paying much attention, when all of a sudden they said, “and it’s vegan.” My head spun around so fast I got whiplash. Did they just say “vegan” on TV?! A few days later, I heard it on the radio, and that night I heard it in three television shows! There are more young people finding out the truth and making immediate changes. There are more adults evolving to a healthier diet. There are more companies creating products that are sustainable, cruelty free, and eco-friendly. There are more countries making laws to protect animals. There is more awareness now than ever before!

What if we didn’t have to torture ourselves with thoughts of how bad it is out there? What if we didn’t have to spread the fear, misery and images of suffering? What if we began to live from the idea that goodness has already won? What if we just knew in every fiber of our being that the cages are open, the forests are growing, the oceans are clean, the animals are free, the gardens are abundant, and the planet is safe and peaceful?! What if we actually allowed ourselves to believe that we will get the world that we so desperately desire? If we can taste it, touch it, see it, hear it, smell it, and believe it, then we can create it! We are creating it right now!

Each of us creates gentleness every time we eat something that causes no harm to another. We create peace every time we have compassion instead of judgment. We create kindness every time we give our hard earned money to companies who have reverence for the planet, instead of wanting to destroy it. When we get together and believe that gentleness has already won, we are unstoppable! That will be my mantra from now on, so if you see me mumbling something under my breath, that’s what I am saying over and over again: goodness has already won! One day soon, in our lifetime, it will be true!