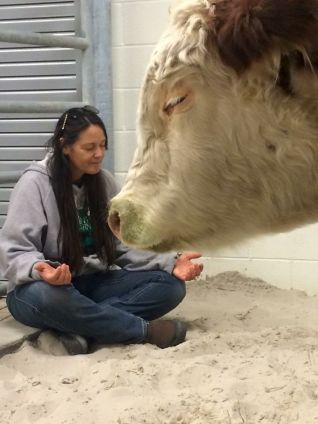 The Gentle Barn was my dream since I was seven, but I spent years procrastinating. Even when I discovered an abusive petting zoo and was finally connected to my life's path, I still didn't have the courage to start my dream until I rescued a little red and white cow named Buddha. Buddha helped all my passions, my gifts, and my visions come to the surface to realize my childhood dream. She taught me how to care for animals and to listen to them. She taught me how to connect people to animals and open people's hearts. She raised me. She held me while I cried. She empowered me when I was afraid. She guided me through my uncertainty. She taught me everything that I now know.

When Buddha passed away it was the hardest loss I had ever gone through and I literally could not function for weeks. The pain was insurmountable. I didn't just cry, I whaled from the center of my soul and couldn't stop. I was completely lost without her. I tried to connect with her in meditation but I was in so much grief that I just couldn't hear her. It was Amanda Reister who helped me through the hardest time of my life. She helped me connect with my Buddha, hear her voice, and know for certain that Buddha hadn't left me at all, she had just left her body. Through that connection I began my recovery.

Since Buddha's passing I have talked to Buddha each and every morning. I would sit in meditation and wait for her wisdom to come. She would help me with smaller things like relationships or trivial life challenges, or she would tell me about my work in the world. She kept telling me over and over again that I had to open more Gentle Barns, save more animals, and get in front of more people. She would tell me that the planet does not have a lot of time, and that it's imperative that I broadcast her message that we are all the same we just look different. So I would ask the board if we could open in different states as rescues would come up, but they said they weren't ready. The years rolled by and Buddha kept relentlessly pressuring me to start the next Gentle Barn. She wasn't interested in the excuses, the financial reasons, or the logistics, she just wanted me to open our next location.

Then in December of 2014, something happened that filled me with excitement and hope. I was sleeping one night and a woman sat on the end of my bed and said in a loud, clear voice, "In exactly six months you will start the second Gentle Barn and you will have the most wonderful two years!" My eyes flew open and I sat up in bed to see who was speaking, but there was nobody there. Was it just a dream? Was it an angel? Was it Buddha? I didn't know, but I hoped her words were true!

A month later I announced to my husband that I wanted to rescue a cow for my birthday. Six weeks later we found out about Dudley. Eight weeks later we were in Nashville saving Dudley and driving him to UT. And six months to the day, we opened our second Gentle Barn in Tennessee.

The first time I laid eyes on Dudley there was a recognition that caused me to hold my breath. He looked exactly like Buddha! The white face, the fuzzy fur, the curly do on the top of his head, the brown fuzzy bear ears, the white markings on the back of his ears, the brown markings near his eyes, and the way he looked at me like he was looking right into me. Could it be? No, I thought, Buddha made it clear that she was not coming back, that she wanted to work with me in spirit. So I dismissed my feelings and concentrated on helping Dudley get the surgeries he needed at the hospital. Then, A few weeks into Dudley's recovery, when he trusted me and I could finally sit near him in his hospital stall, I sat to talk with him and meditate with him. As soon as I sat down, closed my eyes, and started breathing, Dudley laid down facing me, closed his eyes, and breathed in slow and deep, just like Buddha used to do. Jay witnessed the whole thing and took a picture. When I was done Jay showed me the picture and said, "You know that's Buddha, right?!" And again I dismissed it, reasoning that Buddha said she wasn't coming back.

Over and over again Dudley kept doing things like Buddha used to do. He would wrap his neck around me and hold me. He would rest his head in my lap and let me hold him. He had the same sense of humor, intelligence and grace. The way he gave all his energy to his guests, and the way he would keep perfectly still when there was someone disabled or fragile near him was exactly like Buddha. I knew deep inside that Dudley was my beloved Buddha returned, but I wouldn't allow myself to believe it. How could I have gotten so lucky, I must be imagining it.

Almost a year later Jay and I went to see a therapist to support our relationship. She was a very spiritual woman who worked both cognitively and spiritually to help people. This was on our personal time and we did not discuss Gentle Barn, our work, or our animals. She was speaking to Jay about his childhood and all of a sudden she stopped in mid sentence, leaned around Jay to see me and exclaimed, "Oh by the way Ellie, I have a message for you. I had a dream last night where a red cow with a white face named Buddha came to me and said for me to tell you that she is Dudley." I absolutely lost it! I started crying uncontrollably. As the tears streamed down my face they washed away the doubt and uncertainty and I finally allowed myself to accept what I knew deep inside all along: my Buddha was back!

Dudley (Buddha) helped train Andrea to know how to run a Gentle Barn. He gave hope and inspiration to foster children and amputees. He welcomed all the volunteers and created a community. And he helped heal our other animals, turning them into ambassadors. He fell in love and got married. He had birthday parties. He played ball. He played tag with Jay. He got into daily mischief and made us all laugh. He showed the world the true personality of cows, and of any animal when given the chance. And his message was loud, clear, and received by millions of people around the world: we are ALL the same, even though we might look different.

The shock, the grief, the pain, the emptiness...and I know that Jay and I, Andrea, our staff and volunteers grieve along with you whether you met Dudley or not. I know that the idea of coming to The Gentle Barn and not seeing his fuzzy bear ears, or bright alert eyes, or his intelligent face is unbearable. When I start to cry and feel lost, though, I need to remind myself that Dudley did not come here to be an amputee cow for 20 years. He came here for two reasons: to start a Gentle Barn in Tennessee. And to help people around the world adopt a plant based diet. And he accomplished both.

This morning I talked to Dudley and asked why he only gave us two years; I told him it was not enough. He pointed out that if it had been thirteen years or two years, the pain is the same. He said that his work here was done for now. He said he came back and gave me two extra years to kiss, hug, and be with him and I should be profoundly grateful. Dudley was right. I asked if he would come back again and he said yes, when I least expect it. I said that I would be here waiting. And he said, "don't wait! I'm with you all the time. I'm right there next to you, loving you, embracing you, and guiding you, always. All you have to do is think of me!"

Dudley's love was so great, and his light was so bright that we all can access him whenever we want. Just close your eyes and think of him. Talk to him and wait for his wisdom to find you. In the stillness and silence you'll feel him and be guided by him. Dudley's love is still at The Gentle Barn. His wisdom is embodied by the animals there. Dudley passed the torch to Miles and trained him to take his place as a hugging saint; you can feel Dudleys warmth in Miles' hugs. Dudley's spirit is still alive and well... everywhere. Just close your eyes and you'll feel him! If you were touched by Dudley, if you learned from him, if you are grieving now at his passing, please honor his life, his message, and his giant heart by adopting a plant based diet now! Please do not let his life be in vain. Together we can change the world. Go vegan for Dudley!